an honest and unedited rant

Sometimes I think I’ll always be fucked-up, you, know in the head; like all the shit that happened to me started a lifelong war. I can never get away from it, not really. I struggle everyday – some battles I win, a lot of them I loose.

I wish I didn’t feel things so intensely, and so many all at once. But people don’t seem to notice; most of them actually think I’m this super relaxed or even cold and distant person -it can be both a blessing and a curse. I don’t like to come off as a heartless jerk every time I hold my tears back, but on the other hand, some people don’t deserve the satisfaction of seeing me break down.

All and all, I’m just afraid to be vulnerable. I’ve been stabbed in the back, fucked over and shit on by a lot of people… life itself did most of it. I developed this force field around me to hide everything, put distance between people so I could heal. But these awful scars will never be mended. They are so visible to me I don’t know if the force field covers them. Probably not, this is why I have a hard time letting people in.

I used to trust people so much and so soon. Then, life happened; it just sucker-punched me right in the gut.

I still don’t get it. I still ask “why me”. It’s like I was given this weird gift (if I can even call it that) out of nowhere; totally unprecedented. Maybe not, maybe there’s someone in the massive list of the relatives I never even knew the names of. Maybe there’s another poor little bastard going around with a million thoughts revolving around their mind, so fast they cannot stop to even see them clearly.

Fuck self pity. I've always hated it but I can’t avoid it. I’m just stuck here every day with myself. That’s the worst kind of hell – getting all the time in the world to be alone with the shittiest, cringe worthiest memories. It’s a huge step back, I’ll tell you that. But I’m too proud to start from the beginning; I have this need to only fight on my own. So I’m not sure if I’m still recovering or relapsing again.

Writing stuff down always seems to make it better. It’s like putting things away in a box so you don’t have to think about them right away. And doing it in another language somehow makes it easier – things flow more naturally. Lately my inner monologues have been so intense I’m afraid I’ll start to forget my native language even before I have the chance to leave.

That’s another one of my dilemmas. I want to go away so badly, to be somewhere else where no one knows my name or my story; a place where being different is not something to be ashamed of. But I love this place, my house has always been a safe harbor and nature seems infinite. I don’t know if I’ll get to sit outside at 5am in complete silence, focusing on the night sky when a panic attack hits. I don’t know if the new place I want to run away too so badly is going to be too busy when I need to close my eyes for a second.

I want to be there and right here simultaneously. As if I were going to solve my problems by running off and when I realized that I can’t avoid them I’d run back the warmth of my room; and let the vicious cycle go on and on.

I honestly don’t have a clue about anything these days. 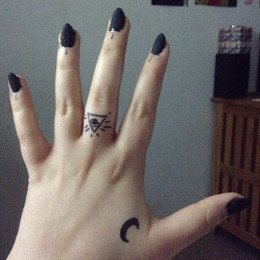 of the last few freethinkers.

of a barely worthy piece of fabric.

All I can think is "what the fuck?"

Look at the imense power

look at what we are blissfully wasting.

Now let me mourne all our losses;

for tomorrow I'll be Change.